So I haven’t posted for two weeks now – I honestly don’t have a good reason; I just took a little break. I was in my hometown for my sister’s baby shower, so naturally, I was spending a lot of time thinking about my roots. When you’re around your family and your friends with whom you went to school, it’s easy to get a bit weirded out with how far you’ve come. I did do a little writing during that time, so this is that.

Every so often, I mention that I went to a catholic school, usually as part of a joke. I’m sure some of the people who went to school with me will read this, so it’s important to clarify that the school I went to was catholic, but it was not nearly as strict, scary, or damaging as I’ve heard some other private catholic schools are. I had a good time in high school, and I don’t have any vast heavy religious trauma to carry around with me. My parents don’t really care what we believe in, so long as we’re happy. I’ve not been the subject of catholic wrath very often, if at all.

For ages, I didn’t think that catholic school impacted me significantly. I’m not religious in a church-going sense, and logistically, there are a lot of problems with organised religion. However, lately, I’ve noticed that although I might not have taken on all of Christianity, it has impacted the things I find important, my values and behaviours in my day-to-day life.

There’s a kind of prayer they taught us at some point – I don’t remember the name of it – but it’s basically just a list of beliefs. This is my version of that, I suppose.

It’s usually a bonus question clipped to the end of a story from catholic school. Do you believe in it? I don’t have a succinct answer. Do I believe in God? At one stage, I’d likely have said no, out of shame or spite. At another, I might have said yes.

My year 7 religion teacher once played Affirmations by Savage Garden during quiet prayer time. We sat there, un-entertained, sweating onto a plastic seat in a demountable in 2013. It took 5 years for me to get the joke. Religion is a good home for irony and a Petri dish for contradiction.

I believe in something, I say. Something vague. Something that’s none of my business.

In school, I learned that Mary might not have ridden a donkey to Jerusalem, and no one said that Eve bit into an Apple. I learned that the details don’t matter – humanity is cursed to feel shame no matter what fruit it was. That truth is less important than belief. I learned that kneeling on wooden floors is painful, and children tend faint when there’s no air conditioner in church. Tradition is merely a routine that you think of fondly.

Tradition is a not-so-secret ingredient in the spaghetti bolognese that my mum makes when I come home. It’s laid to rest in my pile of pillows, buried under all the t-shirts I’ve bought at concerts. It’s written between the lines of old shopping lists and wrapped up in Christmas gifts. It’s in the soundtrack of Clueless. I am religious in that I like what I like and hate what I hate.

Religion is 90% the practicality of faith. It’s trusting a set of beliefs and reinforcing those beliefs through ritual, tradition, and community. I know that a cold August comes with its challenges; and that September first is a second chance.

I am religious in my need for community. In the urge to shake a hand, hug a friend, smile at a stranger. There’s something to be found in every space. I believe most people are good. What is sacred is not necessarily scarce. Despite what the bank would have you believe, commonality doesn’t reduce value. We are privileged to choose the truth we like best. Faith is choosing to believe something that, on paper, makes no sense.

I find reassurance in ritual.

Ritual lives in a dim corner of a cake store, with some sort of triple-layered mouse on a fork and a friend across the table. Neither of us actually likes cake, but we enjoy the idea of having dessert for dinner and someone to listen to.

I believe in irony, and I make a habit of it. I play pretend with the concept of consistency and control. If you’re honest, consistency usually happens by accident. We make a confessional at table 3. You are not your habits; you are made up of your reasons to keep or break them.

I want to believe in salvation, but I don’t care for catholicism’s reward system. I want to think that if you do so many good things, you’ll get good things back. But honestly, I think things just happen. There’s no one keeping score of your good and bad deeds; the staff of the afterlife are not tracking your progress.

You shouldn’t live your life in anticipation of its end. You cannot be morally clear unless everyone is. Humanity is a hive mind. You are carrying the lives of so many others. When judgment day arrives, they’ll have some administrative issues.

I don’t know if I believe in karma. You should do good things in your life, but I don’t think they will save you from mishaps or misery. Life isn’t a series of trade deals to protect your soul from pain.

I think we are born knowing right from wrong, and the rest is learned. I think deep down, we already know everything there is to know; life is just a long game of Russian roulette, and the loaded bullet is confirmation bias. Shopping lists are scripture, and the bible is just a glorified to-do list. I believe that words are sacred, regardless of the actions paired with them.

All of Christianity is underpinned by one concept – kindness. I’ll stand by that until it hurts me. The 10 commandments are good advice, but I don’t believe that I’ll be stricken down if I dare disobey. But I cannot stomach littering. I have to put the shopping trolley in the bay before I leave.

I feel a sense of duty, however small. I don’t care for the idea of an all-knowing, ever-powerful beard in the sky. But I’ll show respect for Him nonetheless. I’ll capitalise His name and ask Him a question every so often. I wouldn’t hurt a fly, but I’ll eat chicken nuggets. I wouldn’t steal a TV, but I’ll slip that ‘table 3’ plaque into my back pocket. I will not lie, but I will mind my business and expect you to do the same. Because it’s not that I don’t believe in God, I just think that all gods are the same jam with a different label on the jar. I don’t think the Christians are correct, and I don’t think it should matter if they are. It’s more about faith than truth. 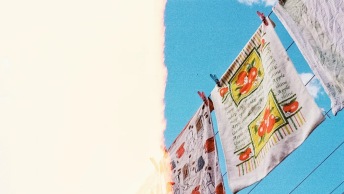 A bunch of not-quite-poems about nothing in particular