Perks of Being a Tyneesha: Paul Kelly, Adulting & Did I Mention Paul Kelly?

This entry is part 2 of 11 in the series:
Perks of Being a Tyneesha

A little while ago, I realised that although I post an enormous mass of relatively pointless rants, I rarely talk about myself and my life. In fact, there have been only two posts this year where I talked about my personal life. And even then, one of them is written in the second person, so it doesn’t count.

Although I’m aware that my more personal posts get more interaction, I put off writing about myself for a few reasons:

Then I realised, the best way to make myself interesting is to decide that I already am. I have a Pisces rising, which comes with a free pass to romanticise every aspect of my life. I will simply decide that I am the most exciting person I know, and as a result, It will be true.

And so, welcome to the new series!

Every once in a while, I’m going to write a little catch-up post. It might be about nothing at all, one specific thing, or a bunch of little things. I’ve decided to call it ‘Perks of Being a Tyneesha’. Named after my favourite cringe comfort movie, which is based on the main character’s diary entire – see the link? Also, because the title has a good SEO score.

The overall aim is to simply document my life, both for myself and, of course, as cliff notes for my inevitable future biography. This is also for the numerous people who tell me that I need to open up more. I don’t do things in halves, friends… so I shall be opening up, and I shall be doing so on the world wide web for all to see. Enjoy!

The last time I wrote a personal post, it was about my car accident, and before that, it was about moving back to Wollongong. I want to say it’s been a while since then, but honestly, the pandemic stole my sense of time, so I wouldn’t know. I could check the timestamps on my photos, but where’s the fun in chronology?

This is a non-sensical montage of things that have happened lately. If you’re particularly concerned about the timeline, feel free to right-click, print this article out, cut it into paragraphs and arrange in what you think is the correct order. If you’re right, I’ll give you a cool rock and a high-five.

I went to Cronulla.

I took the train to Cronulla by myself. I had to meet Dad and Dylan there to pick up my new car. It’s manual, so at the time, I couldn’t drive it back to Wollongong. They had to drive from Dubbo to Cronulla, which of course, takes more time than my train journey from Wollongong. Their drive ended up taking even longer than expected, though, so they didn’t get there until it was dark out. My laptop died on the train, and my phone died later that afternoon. I had no way of charging it, so it was just me and my camera against the world for a few hours.

Those few hours I spent entirely alone in a place I’d never been was some of the most valuable of my life so far. I can’t stress enough how spiritually centring it is to switch off. Decide that you have nowhere to be and no one else to consider, and just observe and appreciate the world around you and your own place in it. I don’t think enough people are comfortable being alone, but quality time with yourself is so important. You have to know and love and be friends with yourself because really all that’s guaranteed in your life is you.

I made it home.

Mum and Dad came down to Wollongong to accompany me on my journey home for Emma’s 18th birthday party. I was planning to drive back myself and have Dad in the car to co-drive. But I had somehow misplaced an entire engine mount – so my car wasn’t going to make it home. Mum and Dad drove us home, and Dad came back the following week to fix my vehicle. It’s a lot easier to drive now that the engine doesn’t do somersaults.

I never thought I’d say this, but I missed Dubbo. There’s nothing quite like a home-cooked meal or going to the only nightclub in town, bumping into people you grew up with. The sunsets are always beautiful there.

My Mum even took me meat shopping and vacuum-sealed portions of all kinds of meat, so I can conveniently stack them in my freezer! And that is why my Mum is better than yours.

Over a month ago, I came down with a pretty nasty cold which has just been unshakeable. Well, it’s getting much better now. I’ve had vomiting, gross coughing, sneezes, sniffles, headaches, sore throats and crusty eyes. As well as just exhaustion. I had to go to the doctors twice; the first time, he prescribed me some anti-nausea tablets, told me to get some rest and said to see how I go. The second time he gave me antibiotics, which seem to be working nicely. That second time, I had to get a COVID test before I was allowed into the medical centre. It’s not COVID, I promise. It was handy, though, because I went to an event in Sydney the day after, still quite sick. But not being COVID meant I didn’t miss out on one of the fun experiences of my life.

We went to Newtown and Newcastle.

My friend Caitlin and I took an impulsive photo trip to Newtown to see the sights. I got her to try bubble tea. Rave reviews.

We also took a trip to Newcastle for a friend’s birthday. It felt like it took forever because our train stopped on the tracks for almost an hour. I was the sickest that I’ve been that weekend, but you do what you gotta do for your friends, and I had a great time regardless.

I sat within a meter of Paul Kelly himself.

I’m sure I mentioned this in the title. I double-checked. But in case you need a reminder, I got to see Paul Kelly! Now, if you don’t know who he is off the top of your head, that’s understandable. He’s one of those people who are iconic, but namelessly. Like Sia, but… before she was famous. And if she was an old man. Anyway, he’s this guy.

I got tickets to a programme by the ABC called The Set. If you haven’t seen it – the basic premise is this – they get three (usually Australian) musicians into the studio, decorated to look like a house party. They invite an audience, and these artists do a mini-concert composed of about three songs. Dylan Alcott and Linda Marigliano hosted this episode, and this particular episode had Paul Kelly, Eves Karydas and Ziggy Ramo as guests. It was so much fun to be a part of. Expect a more detailed post about it when the episode airs.

At the start of the year, I wrote a review of Ball Park Music‘s self-titled album. It was the highlight of my life when they graciously re-tweeted my article. Two weeks ago, I put out a list of recommended artists. In response, Cub Sport liked my tweet, and Pacific Avenue commented on my Instagram post! Of course, it’s not like… Stevie Wonder comments on my socials, BUT it’s a big deal to receive support from people who inspire you.

Understandably, my anxiety spiked following my car accident. I’ve always been relatively resilient; I generally move through my emotions pretty quickly. But this time, my usual coping mechanisms and resilience just weren’t kicking in. My mind was constantly racing. I was always exhausted. I felt restless and scared, and I was crying or having a panic attack every other day. I kept absentmindedly holding my breath because my survival instincts were running on high for no reason.

Getting counselling at Uni is a reasonably straightforward process, and it’s free. Unfortunately, I only had two sessions before my counsellor got sick, and I wasn’t offered a replacement. She ended up being unavailable for quite a while. She’d recommended mindful breathing and some visualisations to try when I was feeling anxious. I’ve been told to try mindful breathing before but passed it off as bullshit. I was wrong; it really did help. I sleep a lot better when I do a breathing exercise before bed, and you can basically bring yourself out of a panic attack with it. After, I went home and felt relaxed again, my breathing went back to automatic mode.

It didn’t fix everything, though. When I went back to the doctors to get my antibiotics, I mentioned that I’ve suspected I might have ADHD for a while now. He told me what I already knew – that symptoms often display differently in Women. He then went through and asked whether or not I’d experienced the listed symptoms of ADHD, and I could genuinely answer ‘yes’ to every one. He said that it’s highly likely that I have ADHD, but he wasn’t qualified to issue a formal diagnosis. For that, you have to see a psychiatrist.

There are ways of managing the symptoms without medicating it. I was having a lot of trouble with hyper-focusing and burning myself out. I’d end up exhausted and yet, unable to settle down and sleep. I’ve never slept particularly well – anyone who knows me is aware that I’m often quite tired. I’ve started taking a magnesium pill before bed, and it’s helped immensely with my quality of rest. I wake up at a decent hour feeling well-rested, and I don’t wake up during the night like I usually would. The rest has, of course, helped with my motivation. I’m more able to focus and absorb information without getting overwhelmed. Also, it’s helped my bad knee to stop hurting all the damn time.

The Monday before last happened to be my birthday. Honestly, it was a relatively quiet one because it kind of crept up on me, and I didn’t think to plan anything. But it was a great, chill day regardless. I had breakfast at the beach, went to my classes, and explored a part of Mt Keira that I’ve never seen before. It rained later in the day and hasn’t really stopped since. Next year is the big 21, so I’m sure I’ll make a big deal of that.

Okay. That’s all I’ve got. That was way longer than I expected it to be – but it’s been a while – I’ll try to update this series more often than every six months, so next time won’t be so beefy. 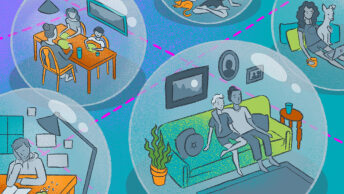