Dr Gary Chapman developed the concept of “The Five Love Languages” in the 90s as an explanation of the different ways that people might give and accept love and care. He proposed that human relationships develop through these 5 methods of care; physical touch, acts of service, words of affirmation, gifts, and quality time.

Chapman’s concept has run rancid through pop culture and social media over the last few years, so I’m sure you’ve heard of these love languages at some point. You’ve probably also seen bastardised versions of the theory in the form of Tweets or memes; people claiming their love language is “sending memes” or “making playlists”. There are BuzzFeed quizzes you can take that will (arguably) help you figure out where you stand and how you tend to give and receive love and care.

That’s not at all to say that the socialisation of this theory is terrible – it’s just another example of people recontextualising information so that they can take it into their daily life. I can’t see anything wrong with people making a conscious effort to care for others and become aware of themselves.

In many ways, the pandemic called attention to the shortcomings of modern society. It exacerbated the effects of constant media input and overstimulation, emphasised the importance of work-life balance and mental health awareness, and brought attention to the inherent need for human connection. For many people, it has been the worst few years of existence, but for many others, the early months of the pandemic and subsequent lockdowns provided a much-needed break from reality.

It’s not hard to tell that the pandemic has had a rather large hand in making people more accepting, adaptable and overall caring. There’s nothing quite like being reminded of your mortality every day by those numbers on the news. Having our affordances taken away from us – our ability to go wherever we like, with whomever we want, made us all the more appreciative of our freedoms. We learned to be adaptable and adjust our care mechanisms to support each other throughout this time.

Amid a global pandemic where the disease is passed through touch, people, in general, were more contact-cautious than ever, whether you were in lockdown or not. In one way, this meant that we were touching other people less, and there was a sort of fear and reluctance built around doing so. In another way, the idea of thoughtful and meaningful touch came to be understood through touch scarcity. We came to understand intentional care. We’re less likely to take hugging our loved ones for granted now – whether it’s safe to do so or not.

For those who were separated from loved ones, adjustments were made to afford some version of quality time. Those in lockdown together learned the difference between time spent in the same space and quality time spent together. I’d like to think that going forward, we don’t take the affordances of in-person interaction for granted, and, when necessary, we are assured that we can still live our lives happily in isolation.

From personal experience, the pandemic made me realise how much love I received that I took for granted. I’ve been primarily a “words of affirmation” person my whole life. That’s still true, but I didn’t realise how much I relied on physical touch until I couldn’t have it. The restrictions affected me differently than how it would affect someone with a quality time love language. Though, I think it’s safe to say that for most people, the adjustments made to show and give love had a lasting impact on our methods of doing so going forward. I was still able to receive love through words of affirmation throughout lockdown, but I’m less likely to take hugging my loved ones for granted now.

I think it’s interesting because although the pandemic is considered a harmful ever-looming disaster, it did provide us with the opportunity to learn to be kind. We are more able now to look after ourselves and each other than ever. Because of that time, we’re consciously aware of the separation and connection between one’s self and our community. We understand what we owe to ourselves and others, and we learned to be creative in our approach to care. If nothing else, the spicy cough brought out the best in us and made us better friends, lovers, family members and teammates. 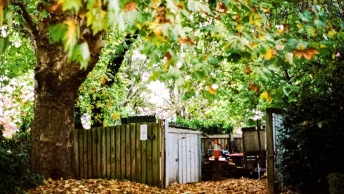 Perks of Being a Tyneesha: Winter is Ending